The claim that some parts of Africa ‘have become 3.5 degrees hotter in the past 20 years’ has now been removed from the commentary of the BBC Africa documentary after Leo Hickman’s investigation − see also my previous post The Power of a Tweet. But where exactly did this 3.5 degree figure come from?

“maximum temperature in Kericho, a highland area in the Rift Valley province where most of Kenya’s tea exports are grown, has increased by 3.5°C during the past 20 years”

[Kudos to Oxfam for putting a note on that page to say that (as of Feb 2013) this figure ‘has been questioned’ and ‘Oxfam would, therefore, no longer cite this as a good example of the general warming trend observed across Africa’.]

However, on 11 Feb 2013 Leo Hickman updated his article to say

“Christian Aid has now emailed me saying it has sourced the claim to this working paper, co-authored by Wandiga and published in March, 2006.”

But the working paper simply gives the overall increase (see Table below –highlighted in yellow by Christian Aid). It did not give any actual temperature data or graphs to support this assertion. We see from the table that the 3.6 deg increase at Kericho was far higher than that experienced at neighbouring temperature stations.

The phrase ‘Working Paper’ made me wonder – was it published elsewhere in fuller form? Sure enough, there is a Final Report by the same authors (5 Mb pdf) on the AIACC site. Here at last, in Figure 4a of that report, we find the data from which the 3.6 degree increase was obtained. Linear regression of the annual mean Tmax gives a 3.6 degree C rise over the 22-year period from 1978 to 2000 (though it seems the data runs only to 1999).

Figure 4a from AIACC 2006 Climate Change Induced Vulnerability to Malaria and Cholera in the Lake Victoria Region : Annual time series (Tmax) for Kericho.

The report says that the temperatures are annual means of monthly and daily data supplied by the Kenya National Meterological Department − but that site does not have downloadable data so I was unable to follow that trail further.

The Kenya National Meterological Department also supplied data for a more recent paper, Omumbo et al. 2011, in the Malaria Journal, also linked by Leo Hickman on 12 Feb (and, incidentally, tweeted by me to Leo Hickman on 7 Feb). Figure 2a in that paper shows the historical raw monthly data for Kericho.

Figure 2a from Omumbo et al. 2011: Time series of monthly values of Tx (=Tmax) at Kericho after removing seasonality.

The step change in 1986 is due to a station move to lower altitude (and hence higher temperatures) described in the paper and in the note Leo Hickman posted from Dr Menno Bouma. Did the AIACC report derive the 3.6 degree temperature rise from this dataset?

I digitised the data from the graphs in the Omumbo et al. 2011 and the AIACC Final Report, and compared the slopes over the period 1979 to 1999. Of course, Dr Judith Omumbo and her co-authors did not measure the slope in the raw data – instead they identified and corrected the 1986 station move before measuring the slope. The temperature trend from their analysis is also shown in the following table:

So it’s clear that the station move could have contributed a large proportion of the temperature increase in the AIACC report. Did the authors of the AIACC report use the same dataset as in Omumbo et al. 2011? I overlaid the AIACC annual points on the Omumbo graph and this hybrid graph (below) shows that this could not have been precisely the case, although the datasets are closely related. 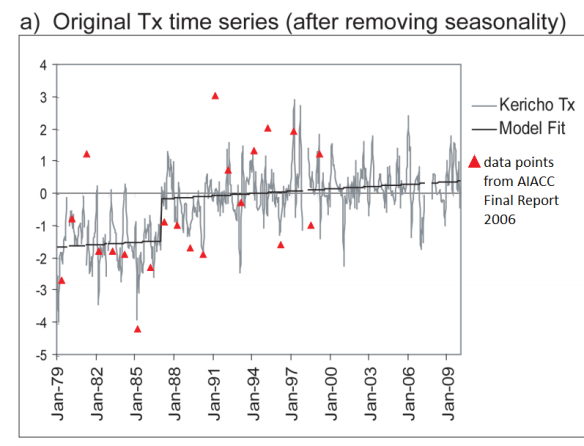 As some of the AIACC annual values fall outside any of the monthly values for the same year in the Omumbo dataset – both lower and higher values are found before and after the station move – the AIACC report could not have used annual means from exactly the same dataset.

According to this article by the authors of Omumbo et al, there was a significant effort to improve the quality of meteorological data in Kenya following the World Climate Conference in 2009. Therefore the high-quality dataset (described by Omumbo et al. as ‘gold-standard’) was not available to the authors of the AIACC report in 2006 (which was described as ‘inadequately quality controlled’ by Omumbo et al. (reference 26)). So, this suggests the AIACC authors were supplied with data from the Kenya Meteorological Service that has since been superseded by higher quality data, and the report’s authors did not notice the discontinuity due to the station move.

The fact that the 3.5 or 3.6 degree figure first obtained in 2006 passed unquestioned from one publication to another and finally to the BBC’s Africa documentary in 2013 shows that such mistakes do matter. I think it was inexcusable for the BBC’s researchers to rely on an  unsubstantiated figure in an NGO report. It should not have been beyond them to do some minimal fact checking which would have revealed the problems with this figure.

But are such problems of quality control now behind us? The Kericho weather station move, it seems, did not make its way uncorrected into the global termperature series. But what about this ‘hot-spot’ in Mexico, from NASA’s GISS dataset? Has an uncorrected weather station change spread its ‘heat’ across Mexico and the south west United States? It does not look like a ‘real’ temperature increase to me. I’m not sure how to investigate this further as the location has no city or weather station name associated with it, but if anyone has further information about it, I’ll be happy to update this post. 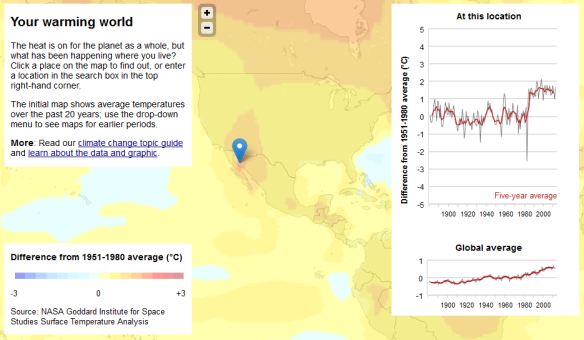 Update (June 2014): another year on, and that ‘glitch’ has disappeared, it seems, and the extra colour contour at the cursor position has gone. However a much larger area of Mexico and North America now shows more than 1 degree temperature increase above the baseline than before:

1 thought on “More about the BBC’s Africa temperature increase”