One of my earlier posts showed how well Ipsos MORI leader satisfaction ratings among supporters of the two main political parties predicted UK general election outcomes since 1997. Ipsos MORI Political Monitor for June 2017 showed that Theresa May had 81% approval among Conservative party supporters, and Jeremy Corbyn had 71% approval among Labour party supporters. So, despite the narrowing of the ‘voting intention’ polls, I am still predicting a Conservative majority. Of course, those satisfaction ratings could still change… 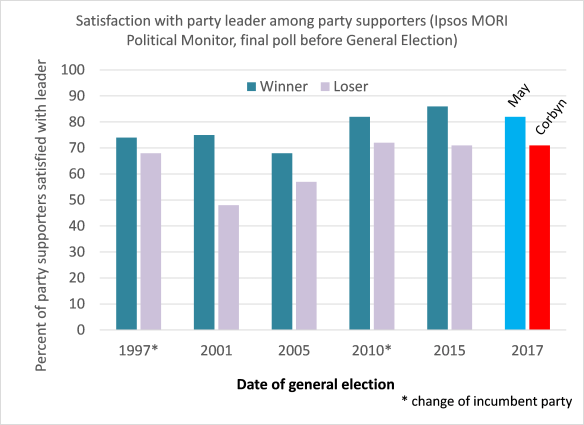 Update: And the size of that majority? I’ve no evidence of that. My feeling is about 50 seats. As a Political Studies Association member I was invited to complete the PSA ‘expert predictions’ survey in mid-May (when the Conservatives were doing very well in the polls). At that time I gave the Tories a 20 % chance of a 100+ majority and a 1% chance of a 150+ majority – that put me in the lowest decile of the expert predictions! So, we’ll see.

Here is the table from that survey (which was taken before the recent Labour surge in the polls).

Post-election update: Well, along with most other predictions (but not all) I was quite wrong about the Conservatives increasing their majority! Instead, they lost seats and Labour gained substantially, though the Conservatives remain the largest party.  The final seat counts are Cons 318, Labour 262, SNP 35, Lib Dem 12, DUP 10, Sinn Fein 7, Plaid Cymru 4, Green 1, Other 1. So Theresa May hangs on with the help of the Democratic Unionist Party.

The leader satisfaction ratings, however, did predict that Conservatives would end up ahead of Labour. I still think these ratings are a good measure of voter intent, despite the fact that they don’t predict the size of the lead, nor (as I failed to notice) do they predict that the leading party will have an overall majority. For what it’s worth, I was among the 10% of PSA survey-takers who correctly surmised that the chance of a large Tory majority was low.

Last week, I attended the Political Studies Association annual awards ceremony (I was there to receive the W.J.M. Mackenzie book prize for the book I wrote with Christopher Hood 🙂 ). The final award of the evening was to Grayson Perry, for his contribution to Art and Culture.

Grayson Perry’s acceptance speech was remarkable, pointing out to the assembled politicians, journalists, pundits, and academics that for all their intellectual knowledge, they may be missing something important (the following extract is transcribed with minor edits from BBC iplayer starting at about 27 min):

“I think the word ‘truth’ is interesting. Because we’ve often talked about truth in terms of academic truth, statistical truth, empirical truth, scientific truth, but we talk very little about emotional truth. And I think that one thing that all of the experts here need to zhoosh up a bit is their emotional literacy. The liberal academic elite have let us down because they are not emotionally literate enough to really understand what fifty-two per cent of the population were thinking, or feeling, should I say.

“There’s a whole world out there that we need to have more empathy with, even if we don’t like the results those kind of feelings bring about. But I thank you for this award from the experts – and I hope that next year you are giving an award for ‘most empathetic’ politician of the year.”

Grayson Perry’s plea for empathy struck a chord with me. Terms such as ‘authoritarian populism’ and ‘post-truth’ are often used by academics and commentators to belittle those with whom the author disagrees. It is all too easy to raise a laugh in a seminar by saying something that disparages Brexiters or Trump voters. Although I voted ‘Remain,’ I feel very uncomfortable when such partisan attitudes are displayed by publicly-funded academics particularly when the targets of their derision are (directly or indirectly) among the subjects of their research.

Some academics have taken a more thoughtful approach. Bo Rothstein and Lennart Levi suggest that teaching ethics should be a priority for universities in order to improve the behaviour of university-educated elites. And Will Jennings and Martin Lodge argue that political scientists should seek a much deeper engagement with society to protect the ‘foundations of liberal democracy.’ While these approaches have much to recommend them, these articles give a somewhat de haut en bas impression, that if only academics communicated certain ‘truths’ better, public attitudes and policymakers’ behaviour would change accordingly.

[update 12-12-16] While I have not seen the phrase ‘deficit model’ applied to public understanding of politics, there is of course plenty of relevant research. For example, greater factual knowledge about the EU does not correlate with positive feelings about it. And Bo Rothstein’s own research shows that ethical concepts such as corruption are understood in very similar ways across different cultures (the differences in levels of corruption are attributed not “to different moral understandings of the problem of corruption but to how different societies come to understand and value the difference between public and private goods and also what most people expect that most other people in their society will do when faced with opportunities for bribery.”)

Finally, and on a lighter note, if you would like to see the UK ‘elite’ at play, the PSA’s flickr album contains 250 photos of the award ceremony. Photos of Christopher Hood and me collecting our award are on p.2. We also wrote an article on government costs (updating the themes of our book) to accompany the announcement of our award. As well as the PSA itself, Sage and OUP also cover the awards.

[Update 20-12-2016] This post, with minor edits, was reposted on the LSE Impact of Social Sciences blog.

About thirty major pieces of government legislation are produced annually in the UK. As there are five main opportunities to amend each bill (two stages in the Commons and three in the Lords) and bills may undergo hundreds, even thousands, of amendments, comprehensive quantitative analysis of legislative changes is almost impossible by manual methods. We used insights from bioinformatics to develop a semi-automatic procedure to map the changes in successive versions the text of a bill as it passes through parliament. This novel tool for scholars of the parliamentary process could be used, for example, to compare amendment patterns over time, between different topics or governments, and between legislatures.

END_OF_DOCUMENT_TOKEN_TO_BE_REPLACED

In a previous post (also published on the LSE British politics and policy blog) I showed that satisfaction with the leaders of the two main parties was a good predictor of electoral outcomes over the past 9 UK general elections. That measure, however, combines responses from people who support the party and those who don’t. So in this post I’m exploring leader satisfaction among party supporters as a way of measuring the level of ‘enthusiastic support.’ END_OF_DOCUMENT_TOKEN_TO_BE_REPLACED

from Punch 1944, seen in the Christmas exhibition in the library of The Queen’s College, Oxford.

A post at Bishop Hill reminded me of this cartoon:

From ‘Soviet Humour: The Best of Krokodil’ Sidgwick and Jackson Ltd., London, 1989.

Earlier this year I was invited to review Nicholas Stern’s new book, Why Are We Waiting? The Logic, Urgency, and Promise of Tackling Climate Change (MIT Press, 2015), for the Journal of Economic Psychology.

The published version of my book review is here (you can email me for a pdf), and a manuscript version is here.

In Why Are We Waiting? (a follow-up to his well known Review of 2006), Nicholas Stern assembles scientific, moral and economic arguments that rapid and radical reductions of greenhouse gas emissions are needed to limit global warming to 2 °C above pre-industrial temperatures, and wonders why progress is so slow.

Satisfaction with party leaders of the two main parties would have predicted the outcome of the last nine UK general elections, including the most recent. This measure is worth looking at in more detail as voting intention polls led many forecasters astray in 2015, as Roger Pielke Jr describes. 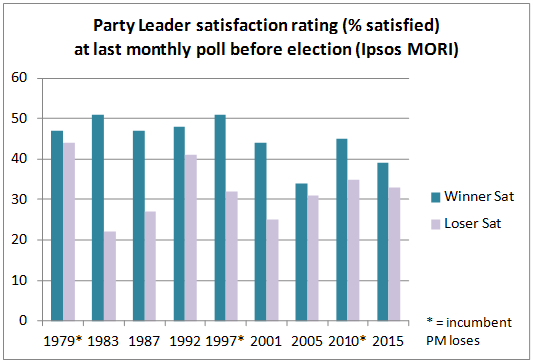 Figure 1. Satisfaction with the Party Leader (Labour or Conservative) a month before the election. Ipsos MORI

END_OF_DOCUMENT_TOKEN_TO_BE_REPLACED

My prediction is that the UK Department of Energy and Climate Change (DECC) will not survive to the end of the forthcoming 5-year parliament.

The people most upset by yesterday’s election result – at least according to my Twitter feed – were the professional pollsters and forecasters – not least many prominent academic political scientists – who universally predicted that the election result would be far closer than it eventually turned out.

You think politics and political behaviour is predictable, and it just goes and defies all your expectations. I've seen enough, night all!

END_OF_DOCUMENT_TOKEN_TO_BE_REPLACED

I’ve been intending to follow up my previous post by looking at the outcomes of judicial review (JR) applications. I’m very grateful for a query from Richard Doughty from The Chartered Institute of Legal Executives, which has prompted me to complete this analysis. END_OF_DOCUMENT_TOKEN_TO_BE_REPLACED